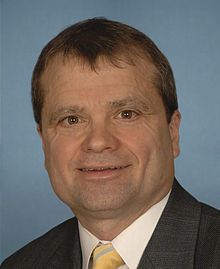 Congressman Mike Quigley – 5th District
The Congressman is normally in Washington D.C. during the 2nd Tuesday of the month. In January, his District Scheduler, Melanie Thompson contacted SLN and let us know that there was no Congressional session scheduled for May 2014 and the Congressman was interested in speaking before the SLN membership. The date was locked in and the Congressman will make his first appearance as the featured Speaker at an SLN meeting.

Most recently, Congressman Quigley traveled to Ukraine with a bipartisan delegation to assess the effect of ongoing U.S. efforts to support Ukraine in the face of Russian aggression following the illegal annexation of Crimea.

Attendance Raffle
We’ve been selling raffle tickets to those in attendance at meetings. It all comes together at this meeting.  Who will be the lucky member?

What happened at the April Meeting?
It’s all in the May Newsletter.  If you’re not already on the email distribution for the newsletter, sign up now.

We’ve added a “My SLN” feature to the website. At this time, it allows you to view and update your contact information and view your membership history.

To set yourself up to use it,

Now that you have a password, please proceed to login. In the future, you can just click on the “My SLN” link on the menu to access your SLN info. Once we’d proved this out, we’ll have the ability to add “member only” content to the website and provide better members services.

If you run into any issues with this, please email “webmaster@slneighbors.org”. Thanks.

For 2022-2023, meetings are held the first Tuesday of September, October, and November, and the second Tuesday of February, March, April, and May.  Meetings start at 7:00PM. (Beverages and conversation start at 6:30.)

South Lakeview Neighbors' newsletter is published in the months we meet.